In December, I was given the opportunity, through my partnership with World’s Marathons, to travel to Rhodes, Greece to run the Roads to Rhodes International Marathon. I was thrilled. I had never been to Greece and running a marathon in the country of the original marathon was a bucket list race for me. The stars were all aligned as I began training for my 12th marathon in January.

Working with my coach from RunRelated, the goal was to shoot for my personal best time on a course that was advertised as flat and fast. In March, I ran a sub 2 half marathon in Nancy, France so I was on target for my PB come April 14th in Rhodes. Personally, I felt good and ready to chase my goal while being able to have a once in a lifetime experience of being sponsored by the Rhodes Marathon Team. As an amateur athlete and blogger, this really was a dream come true!

The Rhodes Marathon group graciously gave me a trip to never forget. I flew into Rhodes on the Friday evening before the marathon from Paris-Athens-Rhodes with Aegean Airlines, an official sponsor to the Road to Rhodes Marathon. From there, I was shuttled to the magnificent 5 stars, all-inclusive, luxury Mitsis Grand Hotel. This beachfront property gives you stunning sunset views over the Aegean Sea while also having 3 on-site pools and several restaurant options with nightly live entertainment. My stay could not have been more comfortable or convenient as it was only a short 10-minute walk to the race start line and 20 minutes from the famous UNESCO medieval city.

The first evening we were greeted by the Rhodes Marathon organizers at the Ta Petaladika restaurant within the Medieval City walls. Off the touristy beaten path this quaint, authentic Mediterranean restaurant provided us with tapas-style plates to try and experience many options of fish, hummus, salads, bread, and wines. Here we met with the fantastic Rhodes Marathon directors and organizers along with other invited guests, press, and journalists. Here I got to meet one of my favorite Instagram bloggers @vase_atanasoska, who was as sweet and lovely in real life as I had imagined, as well as a friendly Greek journalist couple, John and Litsa. If you haven’t experienced the warmth and hospitality of the Greek people, you are truly missing out!

The next morning was an excursion to Lindos, about a 50-minute drive away from Rhodes city. We were brought there by generous volunteers from the South Aegean Islands Region Tourism group in completely electric cars. My first time ever in one! Lindos is a not to be missed as it is a historical and beautiful site on Rhodes Island. Known for the Lindos Acropolis, an ancient temple where the Nike statue was excavated from and is now on display at one of the grand hall entrances at the Louvre, this majestic piece of history provides you with incredible views overlooking the Aegean Sea and stunning beaches. After a half-day tour, we had a bit of a rest before the free pasta party that was held at our hotel for all the runners. Here I met a nice military couple from Kansas who was taking a race-cation, my favorite type of vacation! A unique aspect of this race is truly how international it is with 46 different countries being represented by the runners. 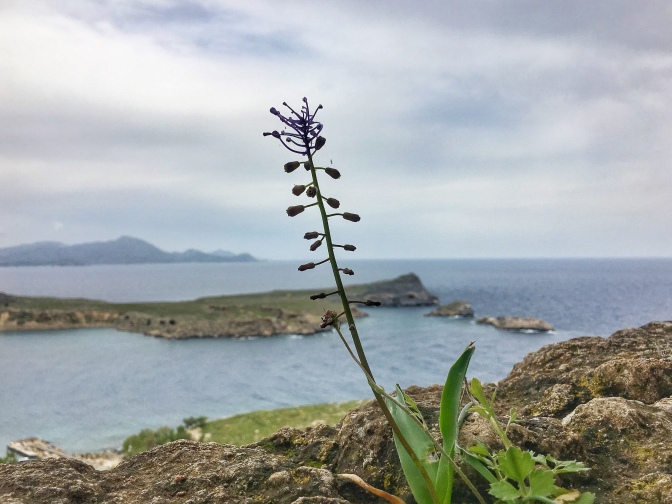 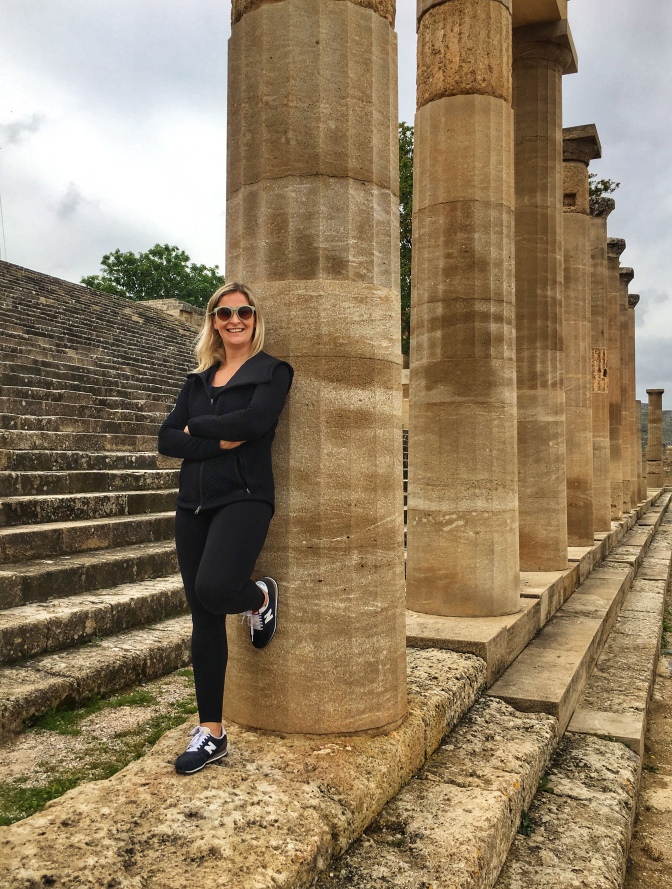 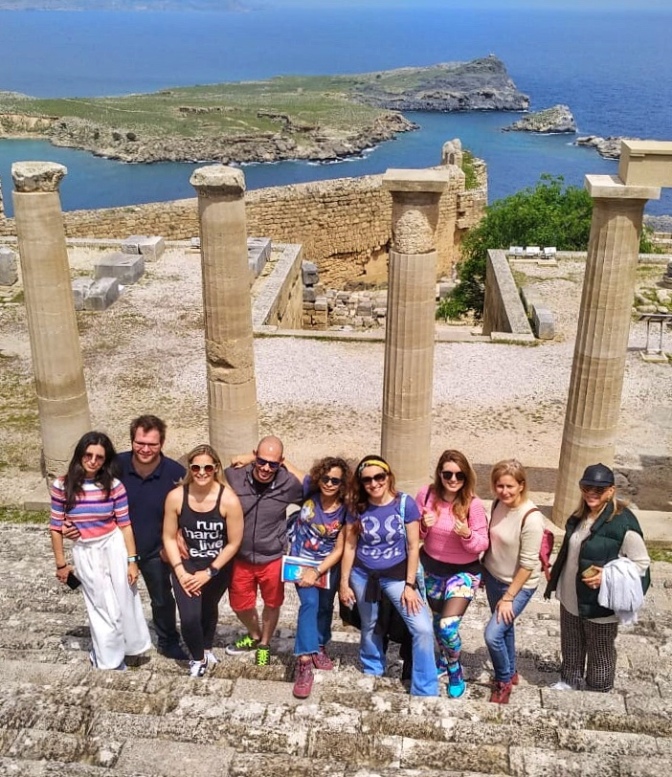 Trying to get some sleep the night before the marathon is always a bit challenging for me but at least the 7:30am start time was manageable and early enough to avoid a majority of the race in 18-20C/64-68F temperatures. April is the start of the tourist season due to Greece’s fantastic weather, however, these temps were a little higher than my comfort zone so even from the start I knew I might have to adjust my race plans. 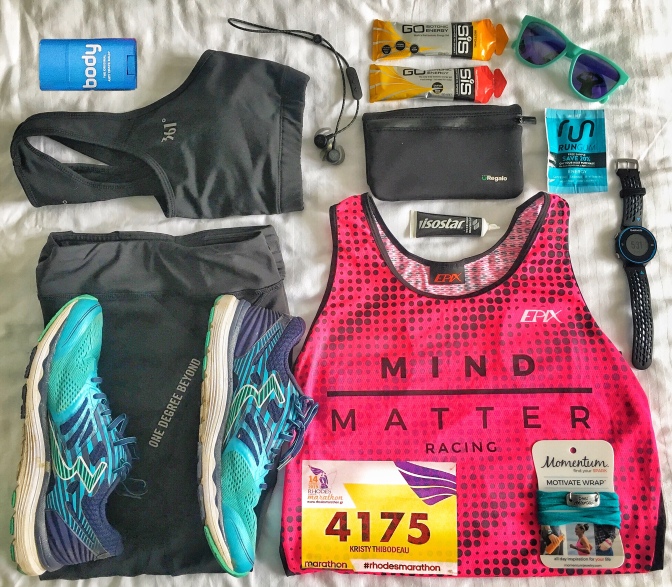 The start went off without a hitch with the half and full marathoners starting together. The race day actually was composed of a total of 5 races (full, half, 10k, 5k, and kids run) with a total of over 4000 runners. The course was made up of a 21km loop (so 2x for the full marathon), always next to the Aegean Sea. For myself, I was feeling good through the first half, totally on target for a PB. The second part of the course was running a second loop, where the marathoners start to become more sparse and spaced out as a majority of the runners were doing the half. In total, there were 165 of us left on the course to finish the full marathon. As I was a bit often alone, the heat and then a strong wind started to pick up on the second half of the course which started to play with my stamina. Constant wind and gusts that were up to 29km/h-18mph started to wreak havoc on my performance and at 25km/16 miles I felt the wheels start to fall off and my PB dreams start to slip away. Around the 34km/21 mile, there was a bit of a hill (not mentioned on the course description) at which point I was suffering both mentally and physically and desperately wanted the race to be over. Eventually, after a brief moment of happiness from seeing my favorite spectator, Julien, the finish was in sight and I walk/jogged my way to a sub 4:30 finish. Not a PB but nevertheless, I’m thrilled with another marathon finish dealing with some challenging elements.

The plus side to an early start is an early finish and we had the rest of the day to relax by the pool and celebrate with some post-finish beers and naps. 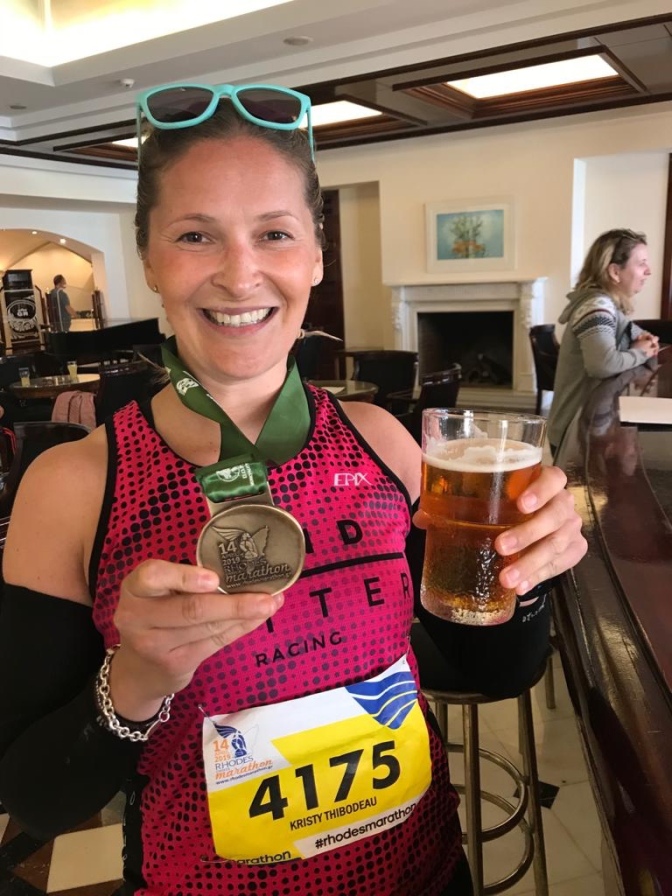 The next day we had a late start which gave me time to stretch out my very sore legs. Later in the day, we were given a complete historical walking tour of the medieval city and Palace of the Grand Master of the Knights of Rhodes. So much history in the narrow, cobblestoned streets. So much beauty in the palace that was actually just recently rebuilt, during the Italian ruling of Rhodes in the late 1930s, for the king of Italy and later for the fascist dictator Benito Mussolini. After the enlightening tour, we made our way back to the hotel for some last night in Rhodes drinks but not before having one of the best gyros in my life. 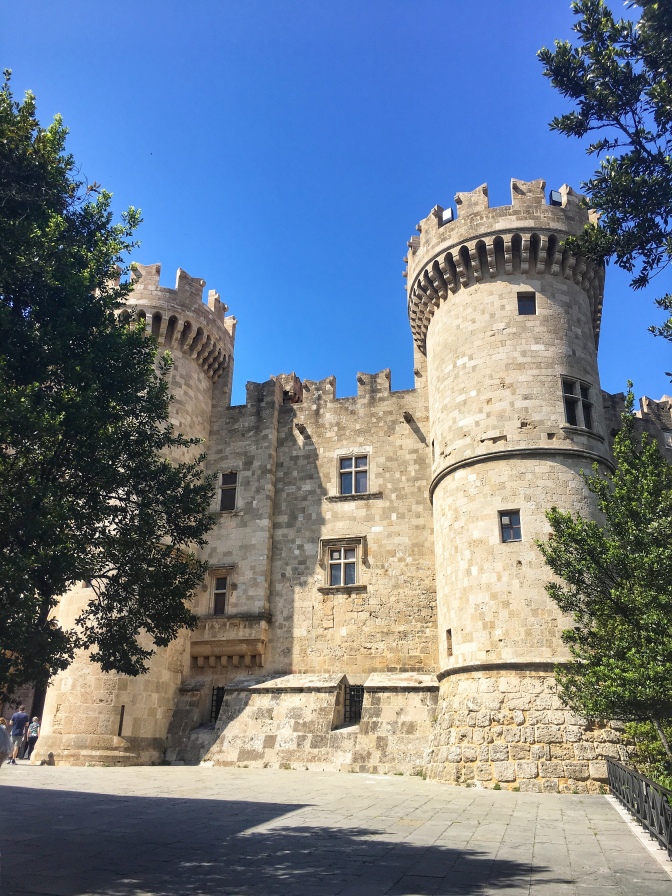 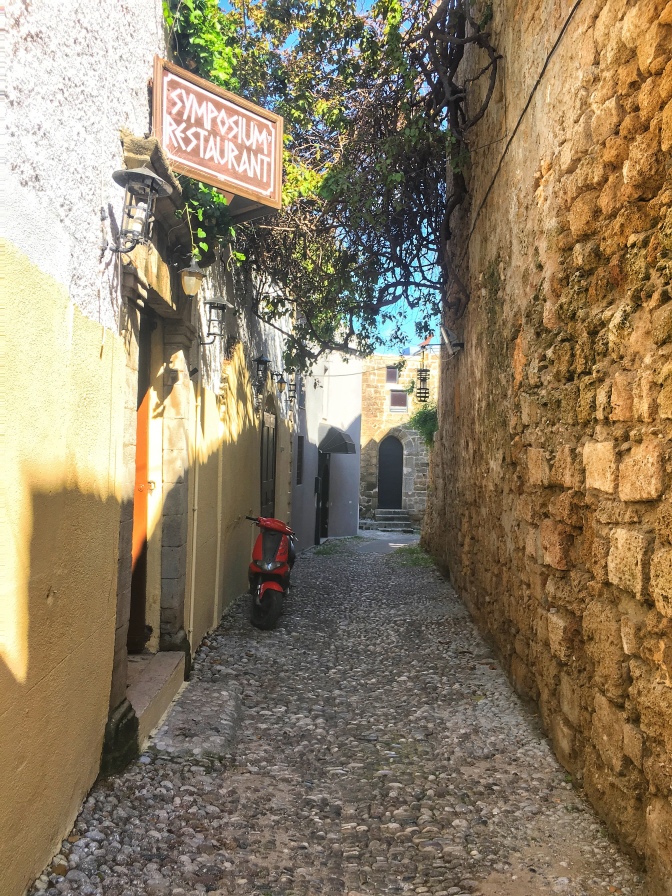 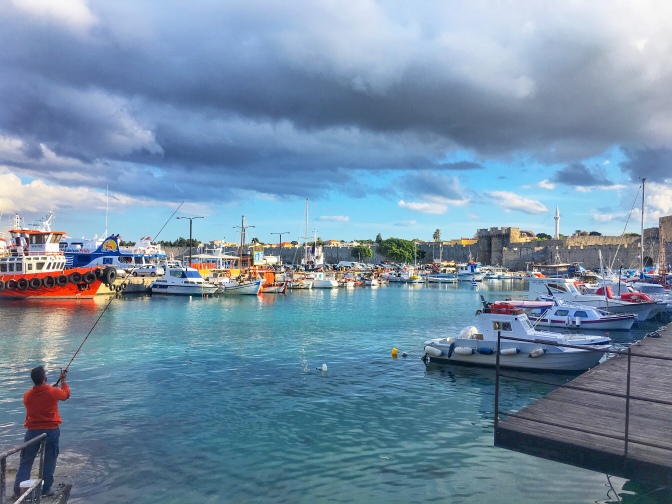 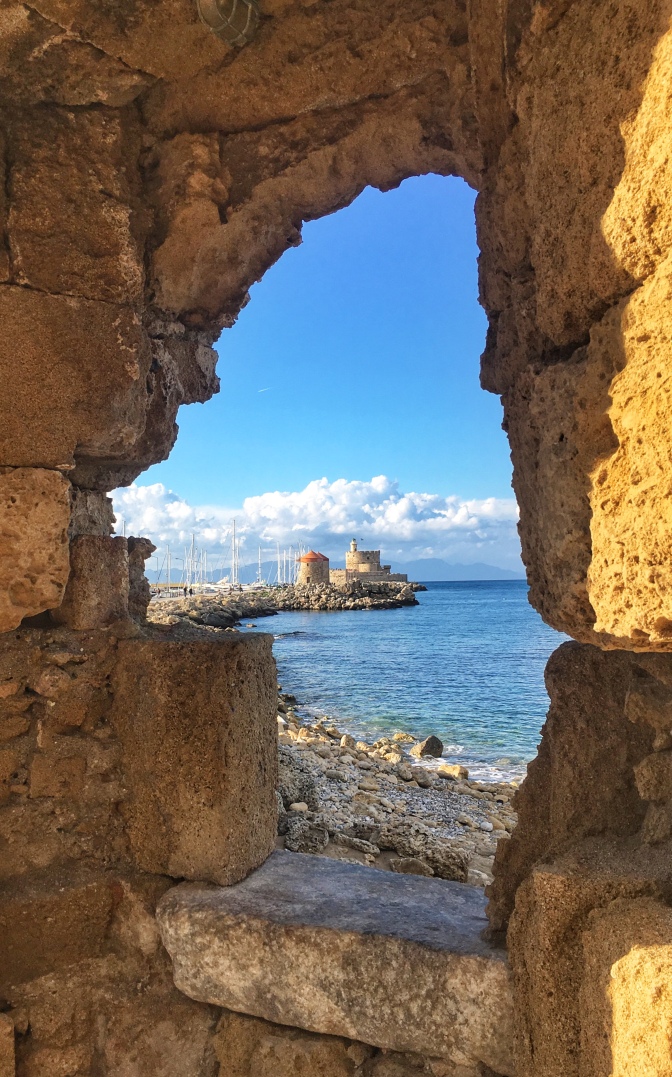 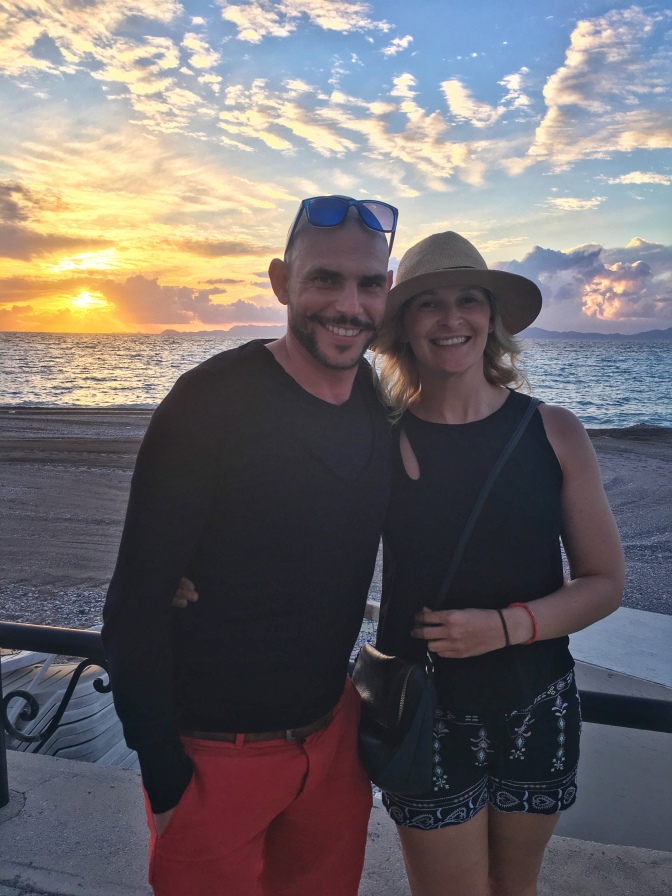 Early Tuesday morning I said my farewells to Rhodes and headed home. This trip was one for the books. The people, the scenery, the weather, the food…Greece makes one feel relaxed and completely at ease. I can’t thank enough to World’s Marathons and Roads to Rhodes International Marathon Group for the amazing experience that made up my 12th marathon. If you’d like to read more about why you should run Rhodes Marathon, check out my other blog for RunnerClick.