I’ve been anticipating, since my return back from Singapore, to give you all the delicious details of my 10 days in South East Asian tour. You can all now release your breath, find a cozy place to take a few minutes to read on about this one delighted, runners’ perspective on things to do and places to see to get the most out of your sightseeing trip when in Singapore. With the plethora of information, I’ve decided to write this in a weekly series of daily itineraries. Here goes Day 1….

After a 12 hour and 30-minute red-eye flight from Luxembourg with a brief layover in Zurich, I arrived with a loss of 7 hours compared to central European time. Since it was already evening upon my arrival at Changi Airport, I wasn’t expecting to get a full day’s activity in on night one. After an easy 20-minute cab ride, I quickly learned they use Singapore dollars, that pretty much everyone speaks English or at least Singlish, and the driver’s side is on the right and the roads are driven on the left. Having passed many open aired trucks on the highway, full of construction workers retiring after a day’s job, I soon discovered the concrete jungle of high rises and constant construction growth to house the 5.6 million, multi-cultural, the population of this island city-state. I certainly wasn’t in Metz, France anymore. Regardless of the population, the country itself is only 719 squared km (or 278 squared miles) and actually made up of a total of 62 additional smaller islands. It’s a fairly new, independent country founded in 1959, so its architecture is not full of history. In fact, the whole financial district is fairly modern, full of sky rises with evening light shows but I’ll get into that more a bit later.

For those who don’t know, I’m was visiting my college friend Katie, who was on a 3-month work stint in Singapore, allowing me to take advantage of coming in the first place. So night one was dinner together on Orchard Road, the famously long shopping avenue in downtown and then immediately making an attempt to get a full night’s rest before a busy tourist day the next day. I slept maybe 4 hours and was up by 4am, a blessing and a curse that with age I’ve found jet lag hits me harder with long travel. Reminder: I was still in training for the Paris Half Marathon scheduled the weekend of my return home. Because it’s one degree north of the equator, you’re dealing with super heat year round with incredible humidity, it’s not the ideal climate for long-distance runners. But I made the most of my jet lag and hit up the hotel gym and got a 5k interval run in before 7am. After a quick breakfast and having purchased a discounted online ticket for Gardens By the Bay, that included the sky walk, I set out for my first day’s adventure by bus before 9am. By the way, public transportation is superb and incredibly affordable, something I used frequently to get to and from a lot of my adventures because it’s just too hot to run around everywhere

Gardens by The Bay 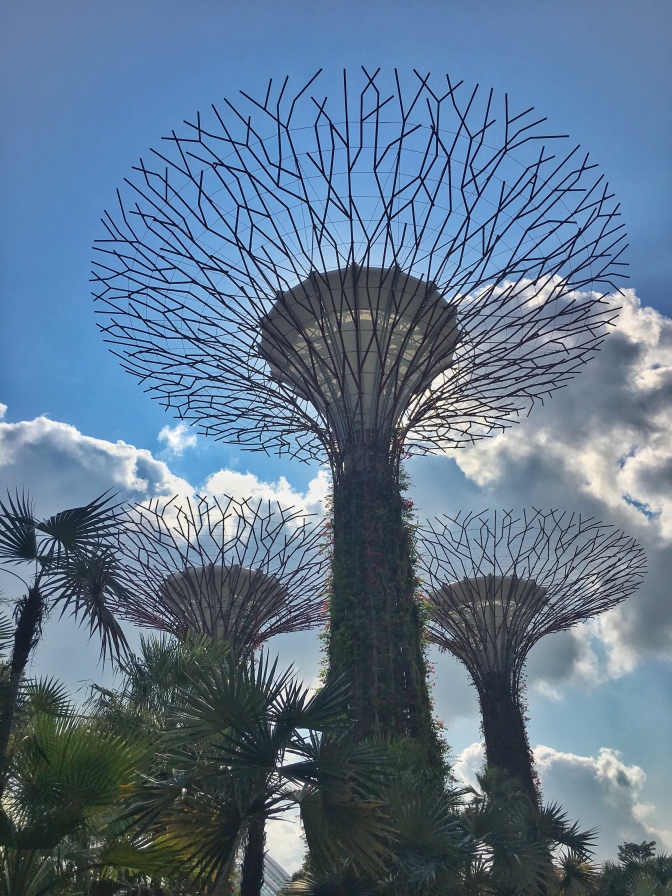 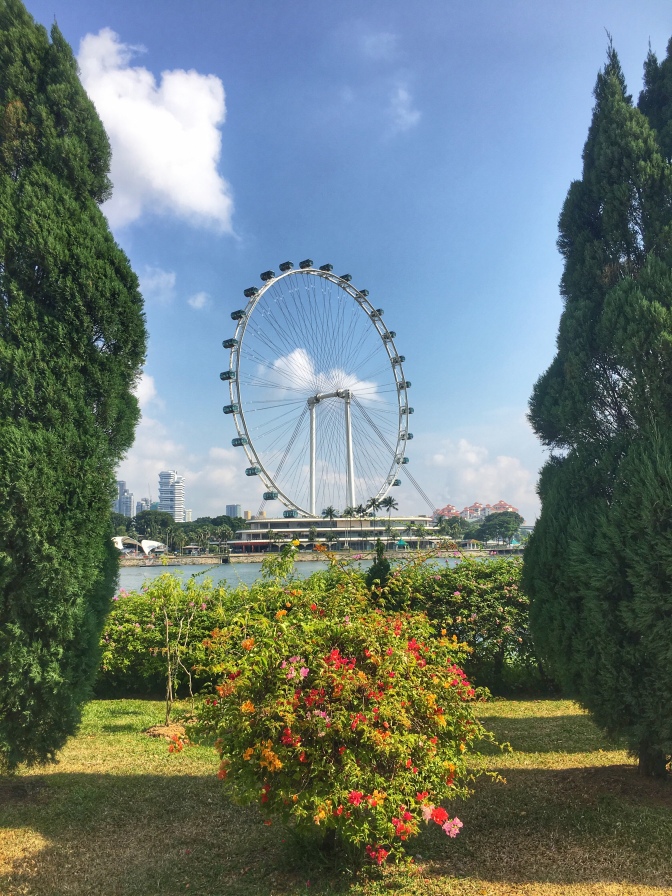 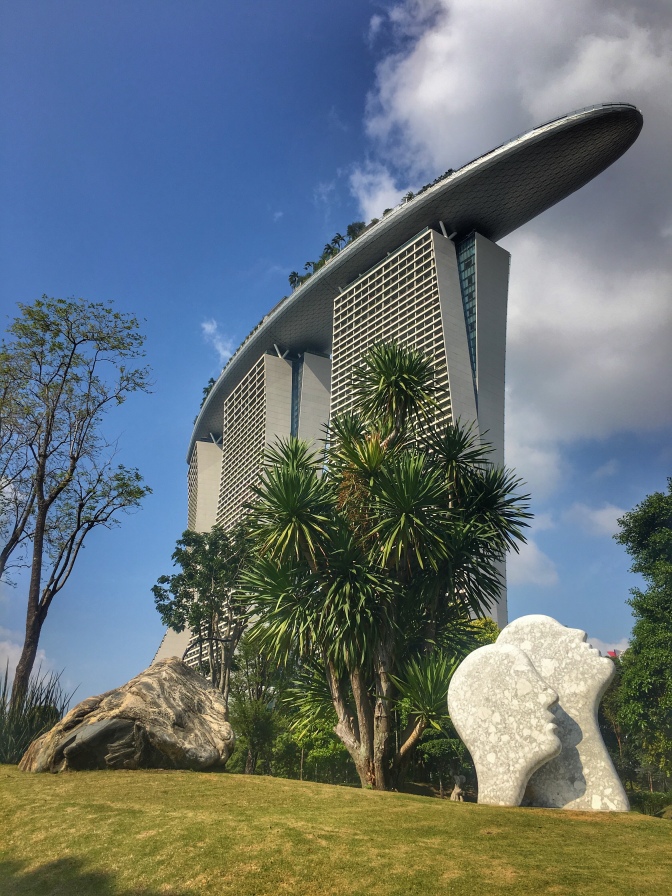 Near the marina, this eclectic garden mixed with modern-day Supertree apparatuses, houses indoor and outdoor botanical beauties. Placed in between the famous Marina Bay Sands Hotel and the Singapore Flyer, you can get some great photo ops of the iconic structures. My first stop after a short walk around the outdoor gardens was to hit up the skywalk, as recommended seeing before peak day to avoid the heat from the sun. After, I made my way towards the two indoor conservatories; first, the Cloud Forest which encases a 35m (115ft) indoor waterfall and second, the Flower Dome which is the world’s largest column less and eco-friendly glasshouse. 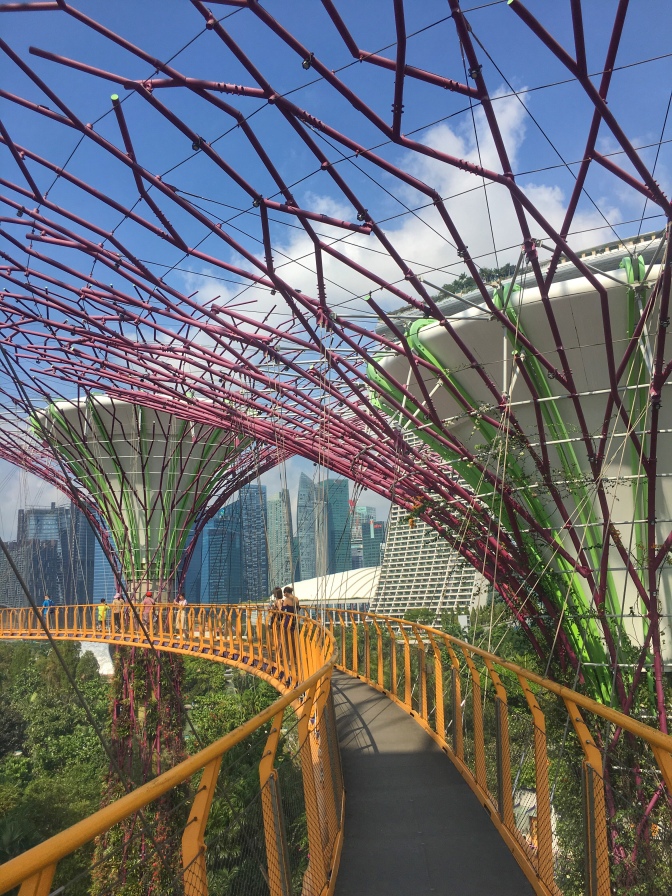 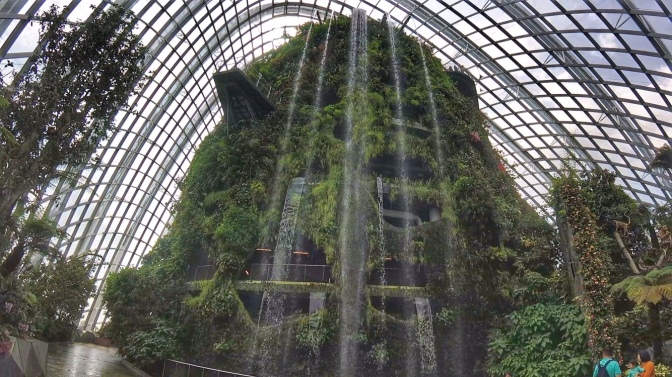 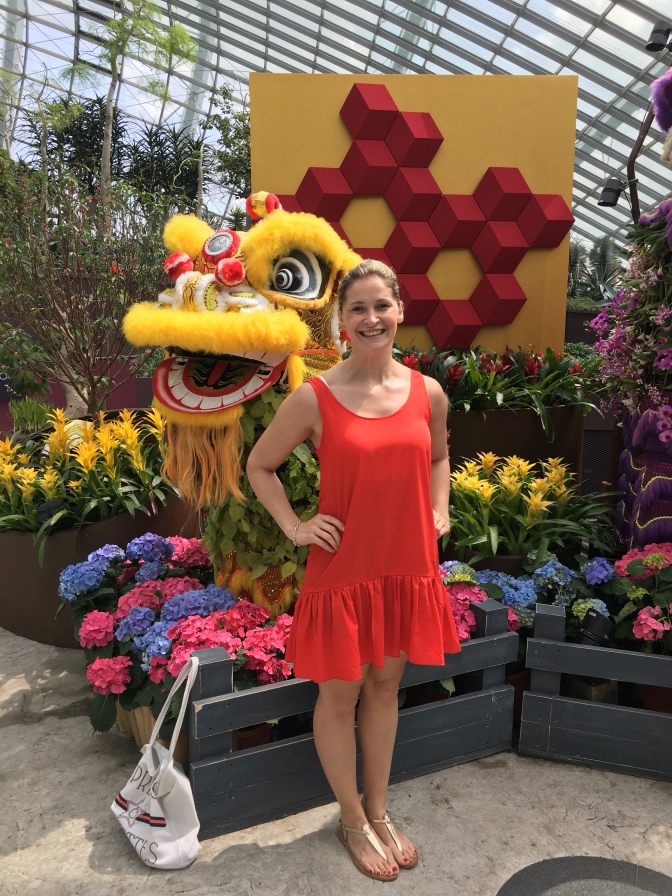 From the gardens, I made a brief walk over the helix bridge towards Merlion Park. Along the waterfront with another spectacular view of Marina Bay Sands, sits an impressive 8.6m mythical, half lion/half fish, water spewing statue. The landmark is the Singapore mascot. 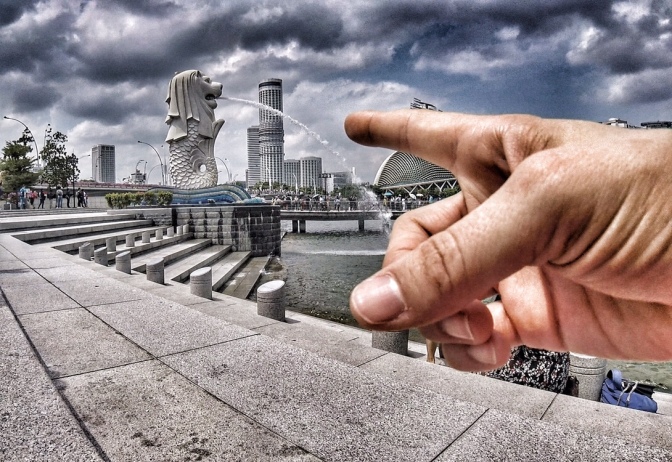 With almost a half-day spent, I was getting hungry and found myself making my way towards Chinatown with a pit stop at one of the famously known Hawker Centre Food Courts. Each court has numerous stalls housing authentic, local and nearby cuisines for mere dollars. For sure, should not be missed. 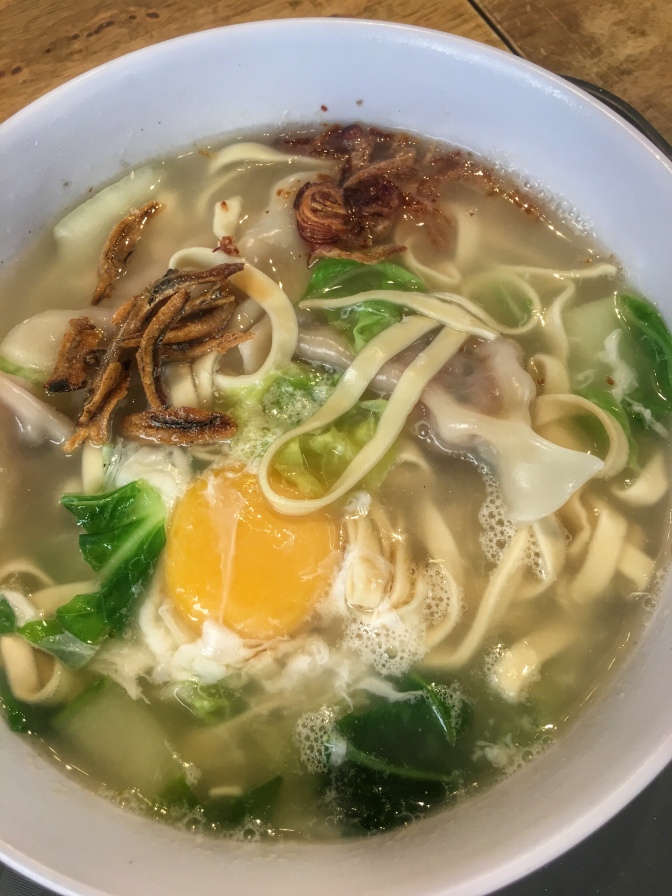 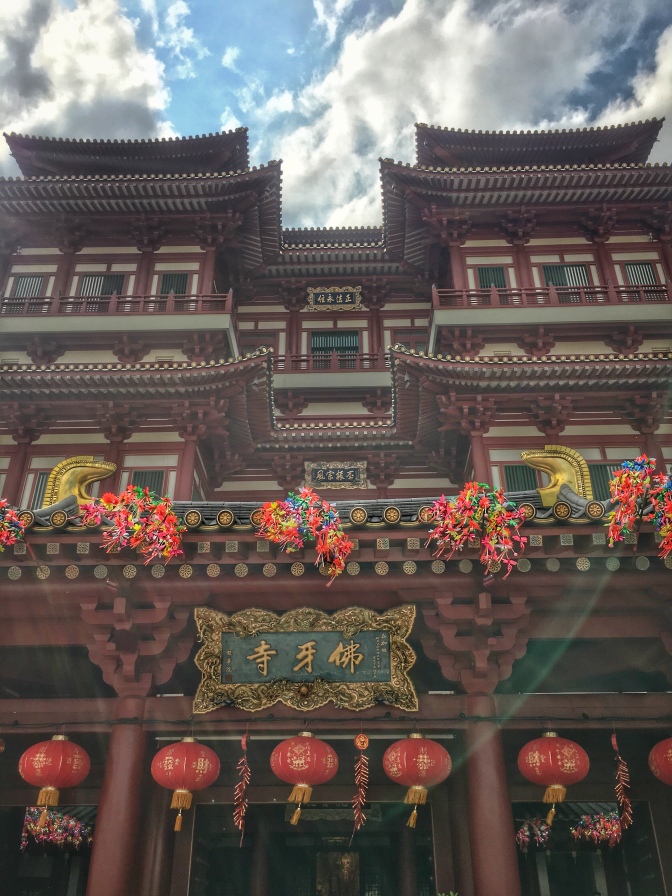 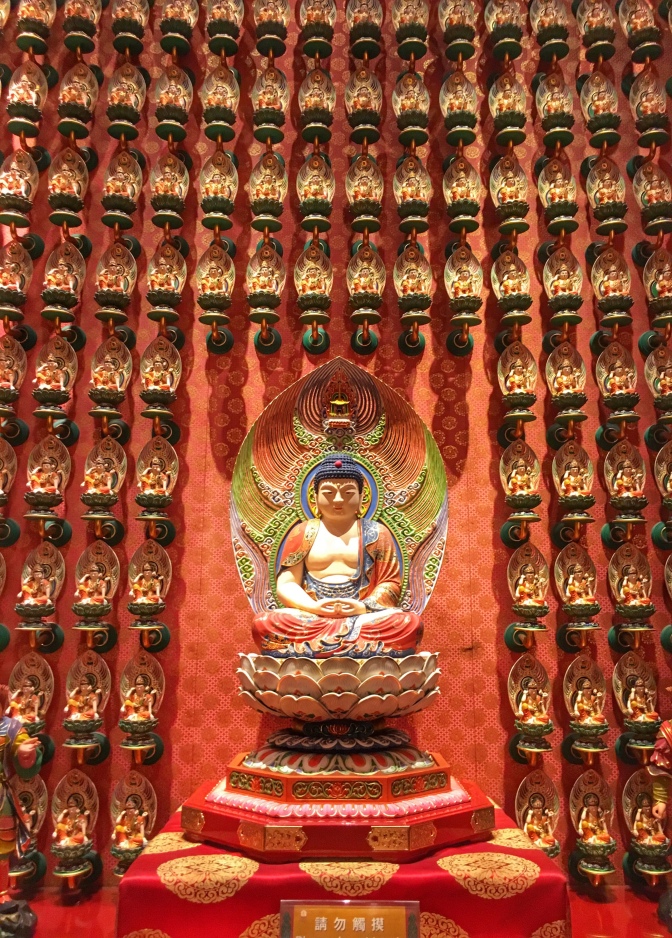 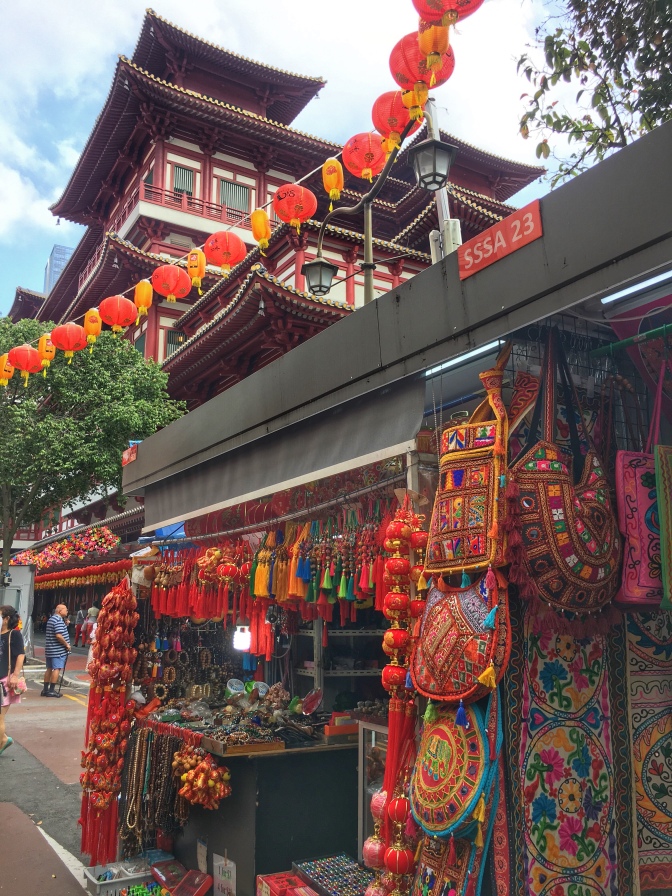 33% if the Singaporean population is Chinese and Chinatown keeps authenticity close to home with its several temples, most famously Buddha Tooth Relic Temple and Museum. Amongst the magnificent 4 story temple is several, narrow, mostly pedestrian-only streets that have negotiable markets for souvenirs and fruit stands where you can try a piece of the stinky Durian fruit. After 13 miles of walking, a little shopping and quenching my thirst with a couple Tiger Beers, I met back up with Katie and we made our way to the river for dinner. 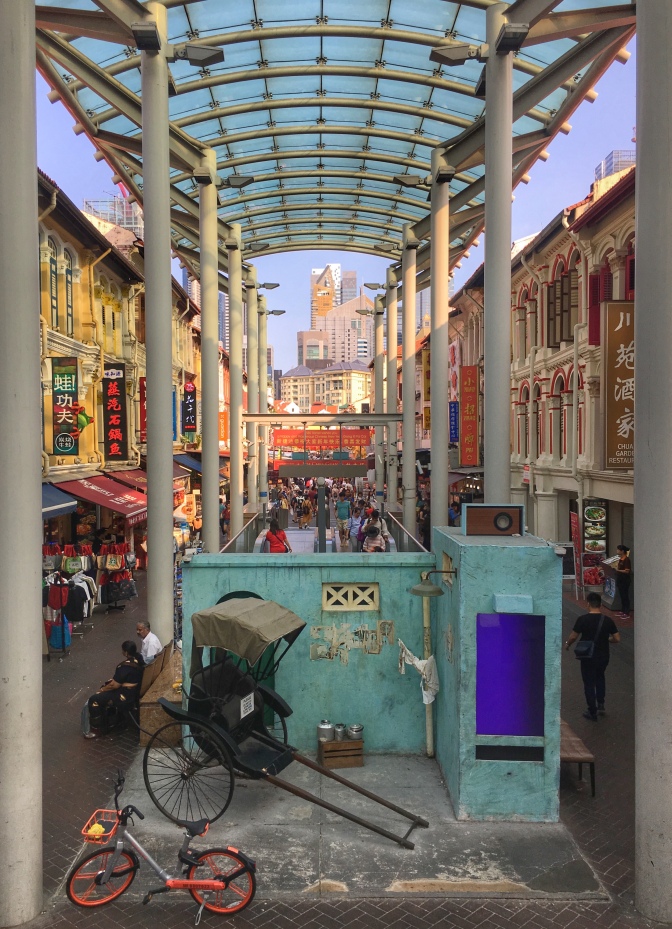 A great area for specialty food and cocktails with a peaceful view is Clark Quay along the river. Clark Quay is home to several restaurants with most providing specialties of Singapore including the soft-shelled crab. The crab is stir-fried in either pepper or tomato-based chili sauce. Paired with sticky rice and garlic spinach, this meal is as messy as it gets but a sweet memory of flavor and fun that I won’t soon forget. 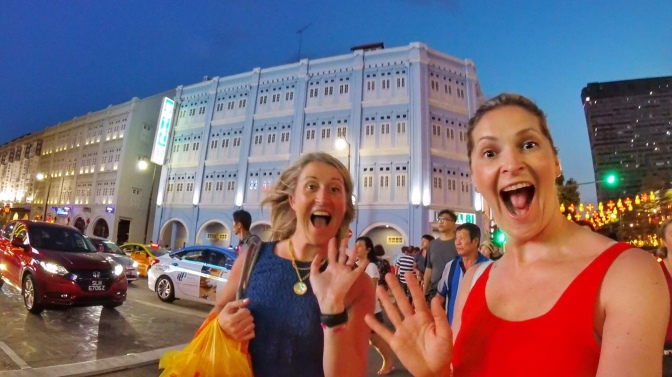 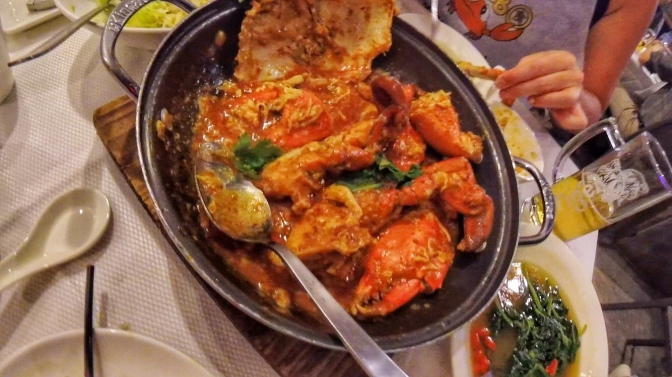 Katie and I having chili crab in Clark Quay

Stay tuned for next weeks blog when I make a venture to Sentosa Island! 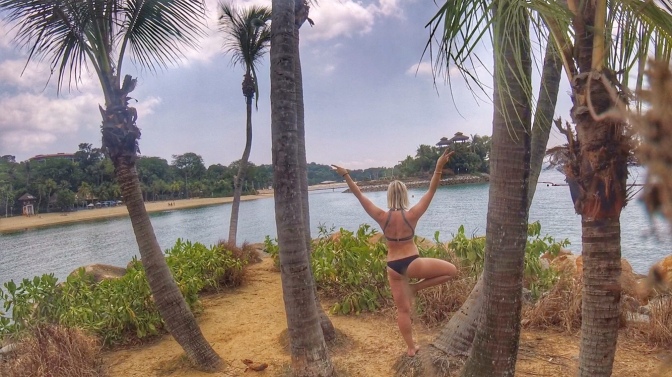 3 thoughts on “What to do in Singapore from One Runners Perspective. A weekly series of daily itineraries : Day 1”