On September 24, 2017, I ran and surpassed my finish expectations for my tenth full marathon by completing the 44th BMW Berlin Marathon in 4:19:58.

My marathon “career”, hobby, passion, self-torture began in 2006. Here’s a running list (while mind you there have been dozens of half marathons, 10km, mud runs, and fun runs and thousands of miles from training,  also in between):

While my times stay somewhat, relatively consistent within 30ish Minutes, I’ve definitely become slower over the course of time. I’m ok with that and had started labeling myself as a 4:30 marathon runner.

I don’t like sprint work, I don’t like the feeling of my heart pulsating out of my chest, and I don’t like not having a fun time, being able to talk to others and take in the atmosphere and experience of my run-cation. These are the main reasons I’ve never felt to push myself to obtain a personal record with each of my races.

Running for me, personally, is something I do for relaxing my constantly running mind (if that even makes sense) and a way to stay healthy. No more, no less. For some running is about being the best they can be every time and for others it’s learning how to complete the impossible. Running is a personal sport that can make some feel self-love or self-hate. The gigantic community of runners can make you feel big and small at the same time. Everyone is allowed their own reasons for why or how they run and no one has the right to judge or criticize someone’s journey.

Berlin, particularly for me, was a huge goal to knock off my bucket list. It would be my 3rd Abbot World Major and the lottery or qualifying system to get into one of the 6 majors (Boston, Chicago, Berlin, NYC, London, Tokyo) is a huge long shot. So when I applied last November for this race, I assumed I wouldn’t get into it as I’ve been rejected from NYC and London several times in the past. I even signed up for the Rome marathon at the same time for April because I figured I wouldn’t get into Berlin. Well, luck was on my side and I made it! But I then realized I had to run 2 full marathons in 2017.

I’ve been in training since November 2016 meaning I was running 5-6 times a week, including 2x a week doing speed and hill workouts because in the back of my mind I was thinking maybe I could get a personal best on this acclaimed flat and fast course. But after Rome in April and two half marathons this summer, my body was beaten up. The training cycle for Berlin, specifically, was brutal. I was tired, sore, mentally drained. I wasn’t hitting all my distance targets nor completing most of the sprint work. Personally for me, more than one marathon a year tends to shut my brain and body down. I honestly was not looking forward to running Berlin about 10 weeks into my training. But then I had a mental shift to remember that having fun is more important to me than a time goal and I learned to forgive myself for having a legitimate reason to feel tired. Then the mental game clicked and I was super excited to get to Berlin.

The atmosphere of a world major marathon is one of the best experiences. The city is swarming with people from all over the world to each take on the same task. The Expo always gets you ramped up when you grab your number and buy a souvenir or two. One disappointment was that finisher shirts were not included in the entry fee. If you wanted any piece of memorabilia besides a medal, you had to spend at least 45€ and the cool jackets were closer to 90€ but that’s a rant for another day. That evening, btw my dad and most loyal spectating supporter had flown in for the marathon as well, we made our way over to Checkpoint Charlie and saw some pieces and read about the history of the Berlin Wall.

Any disappointment from the overpriced merchandise at the Expo was quickly wiped away with the free Saturday morning breakfast run. The laid back 6km run started at the Charlottenburg Palace and ended on a lap around the track of the 1936 Olympic Stadium with breakfast included. One of the best parts of the weekend plus I got to meet up with a fellow Run Janji ambassador and my favorite British couple that I met at the Virgin Sport British 10km in July. 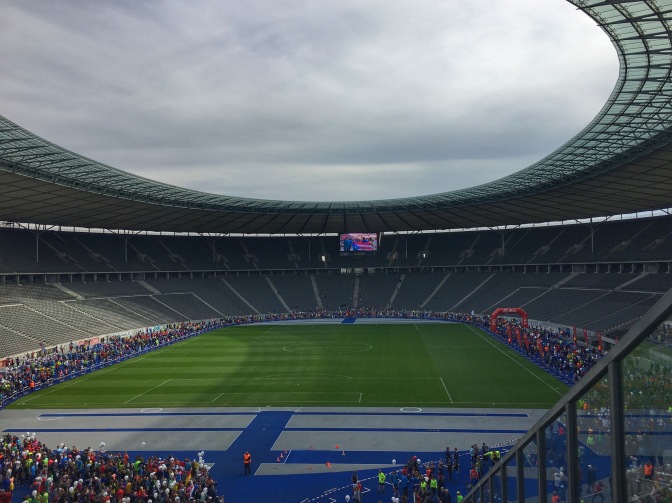 Saturday afternoon we did a 3-hour Bike Tour of Berlin. It was leisurely and educational plus we got to spectate a little of the inline skating marathon that was taking place. After our bike tour, we made our way to the sobering Holocaust Memorial and Museum.

Sunday I was scheduled for the 3rd wave slot that had a 10am start, with an elite start time of 9:15. Easy subway transportation allowed me to sleep till 7am and head over around 8am. I chose not to bring a drop off bag but the organization at Tiergeten Park was well defined, although you did have to walk about a mile and a half from the closest metro stop to get towards the start. Plenty of porta-potties, lots of musical and video entertainment on several big screens helped the 40 thousand of us stay occupied til the gun.

The race went off without a hitch, The temps were cool (10C/50F) with a little rain to start. The race was crowded, honestly, in its entirety. The crowd support was awesome with live bands every so often along the way. Because Berlin is built on mostly water, there aren’t many skyscrapers and the buildings are all about the same height making everything look the same with little standing out, so it was nice to have the entertainment as a distraction. The course itself is exactly as they say, fast and flat, and my starting times were, for me, quicker than I was planning. But I felt good, so I held onto the 9:15-9:30 pace up until the halfway point when I was looking for my dad. I thought to myself, “if you go fast now that means you can slow down later”. Which, btw, is the opposite of what pros would tell you to do. After seeing my dad I maybe had a mile at about 11 min pace but felt good enough to go back to my original pace. The volunteers and aid stations were fantastic and I really felt energized by the crowd and cool temps. So I pushed on at this pace comfortably through the second half. Upon hitting the Brandenburg Gate, I was sprinting and smiling towards the finish knowing I would have one of my best times since 2009!

I’m so elated and proud to have completed my 10th marathon with my 4th best time after having a crappy training cycle. My enthusiasm is renewed and my goal will be to push forward and complete all the world majors! But first a break from racing for the rest of 2017 😉.